Route 495 is a 3.45-mile-long, divided urban freeway in Hudson County that connects the New Jersey Turnpike to the Lincoln Tunnel. Route 495 is four lanes at its western limit where it meets the NJ Turnpike (I-95) at exit 16E. The freeway is mostly six lanes, with an eight-lane section across the Route 495 Viaduct. Route 495 traverses four municipalities in Hudson County. Beginning at the western terminus, Route 495 passes through Secaucus, North Bergen Township and Union City, ending in Weehawken Township.

The Route 495 Viaduct is a nine span bridge that was constructed in 1938. The bridge carries traffic on Route 495 over the NYS&W and Conrail rail lines, as well as Route 1&9, Paterson Plank Road and Liberty Avenue in the Township of North Bergen, Hudson County. The bridge is rated as structurally deficient and functionally obsolete. The purpose of the project is to rehabilitate the Route 495 bridge, which will extend the useful service life of the bridge for an estimated 75 years and eliminate the need for potential emergency repairs.

The Route 495 Viaduct (Structure No. 0917-150) is a nine-span bridge that was constructed in 1938. The Route 495 Bridge carries traffic on Route 495 over the NJ Transit Park and Ride, the NYS&W and Conrail rail lines, as well as Route 1&9, Paterson Plank Road and Liberty Avenue. The bridge is rated as structurally deficient and functionally obsolete.

The Viaduct was constructed with 3 lanes in each direction, and one lane on each of the westbound ramps. Between 1955 and 1985, the bridge was widened, and now carries 4 lanes in each direction. Throughout the life of the structure, it has been re-decked, rehabilitated multiple times. However, there have never been any significant modifications or repairs to either of the attached ramps.

The project will rehabilitate the structure by replacing the mainline deck; the decks of the ramps to Route 1&9 Southbound and Paterson Plank Road Northbound; and repair/replace deteriorated steel. Additional improvements include adding new lighting, drainage system, barrier and guide rail. The rehabilitation of this bridge is expected to extend its service life by at least 75 years. 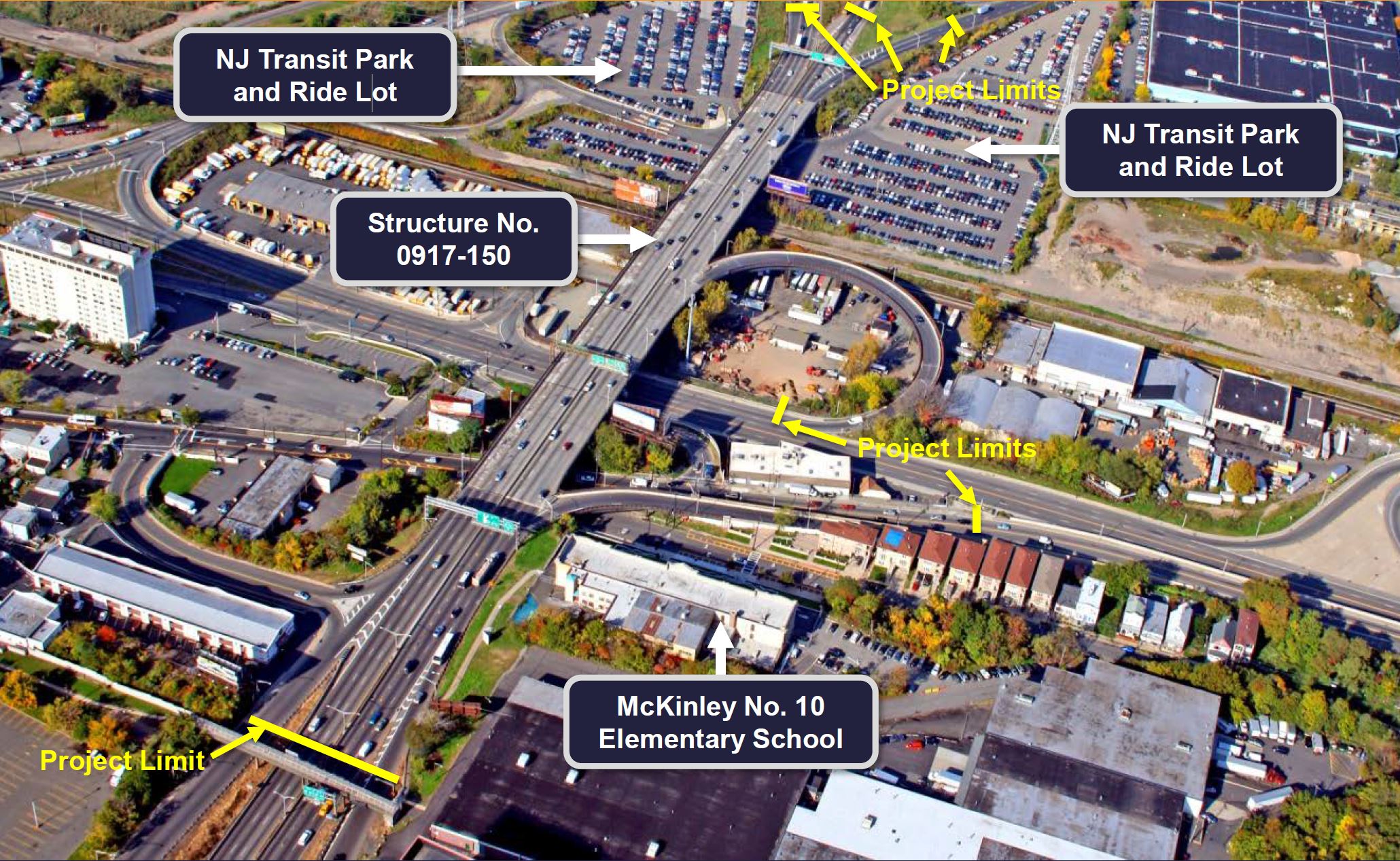 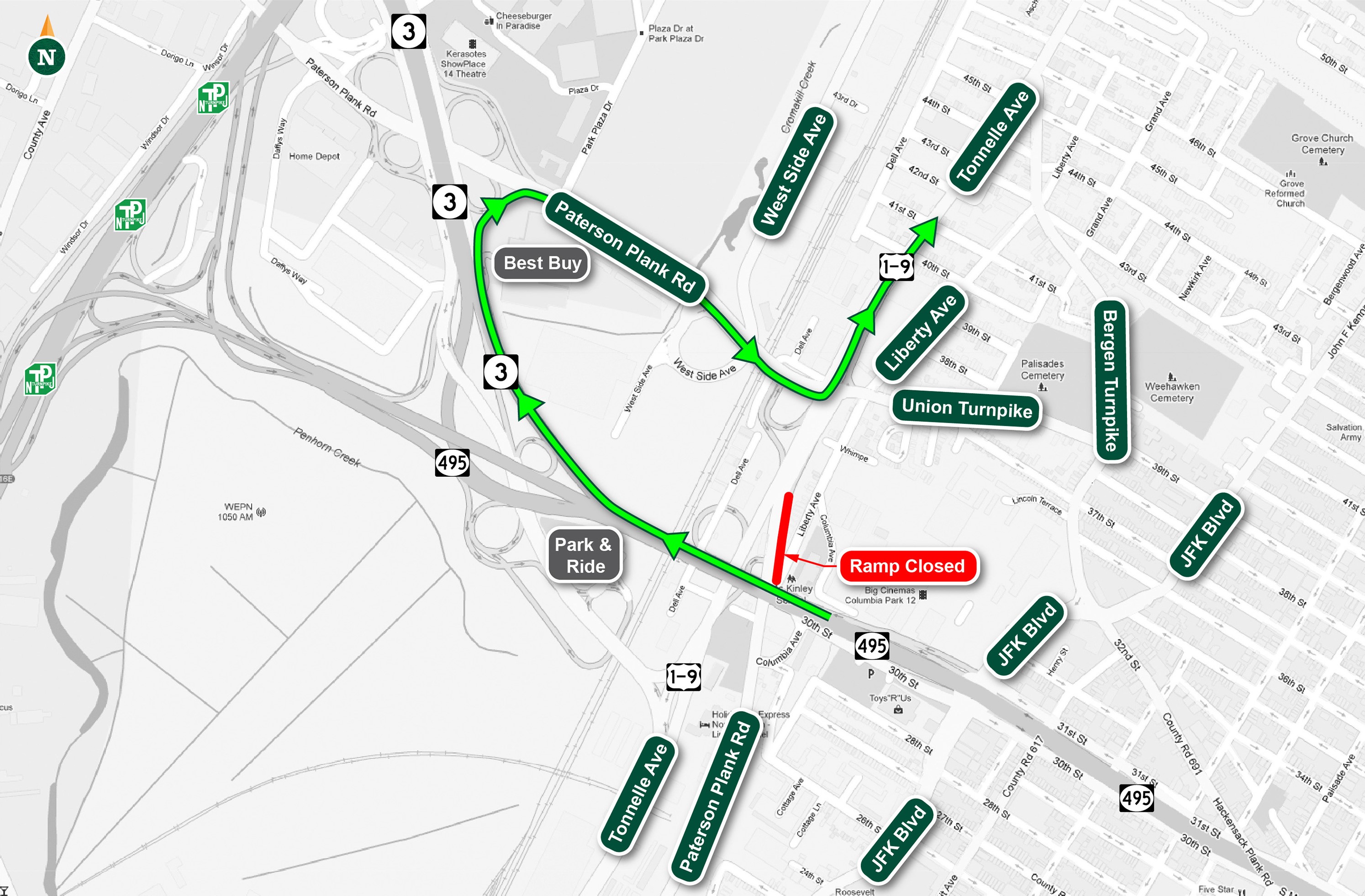 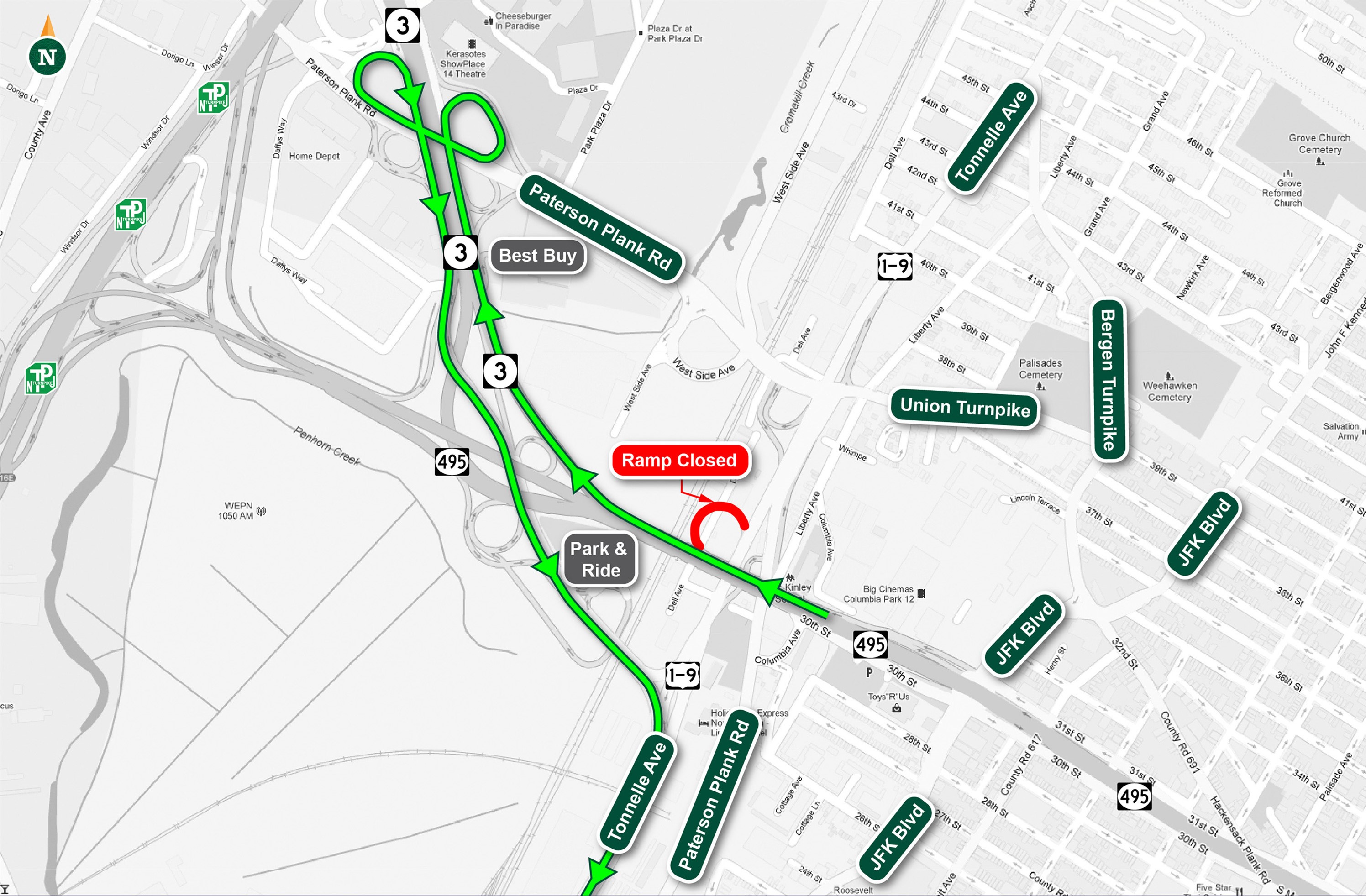 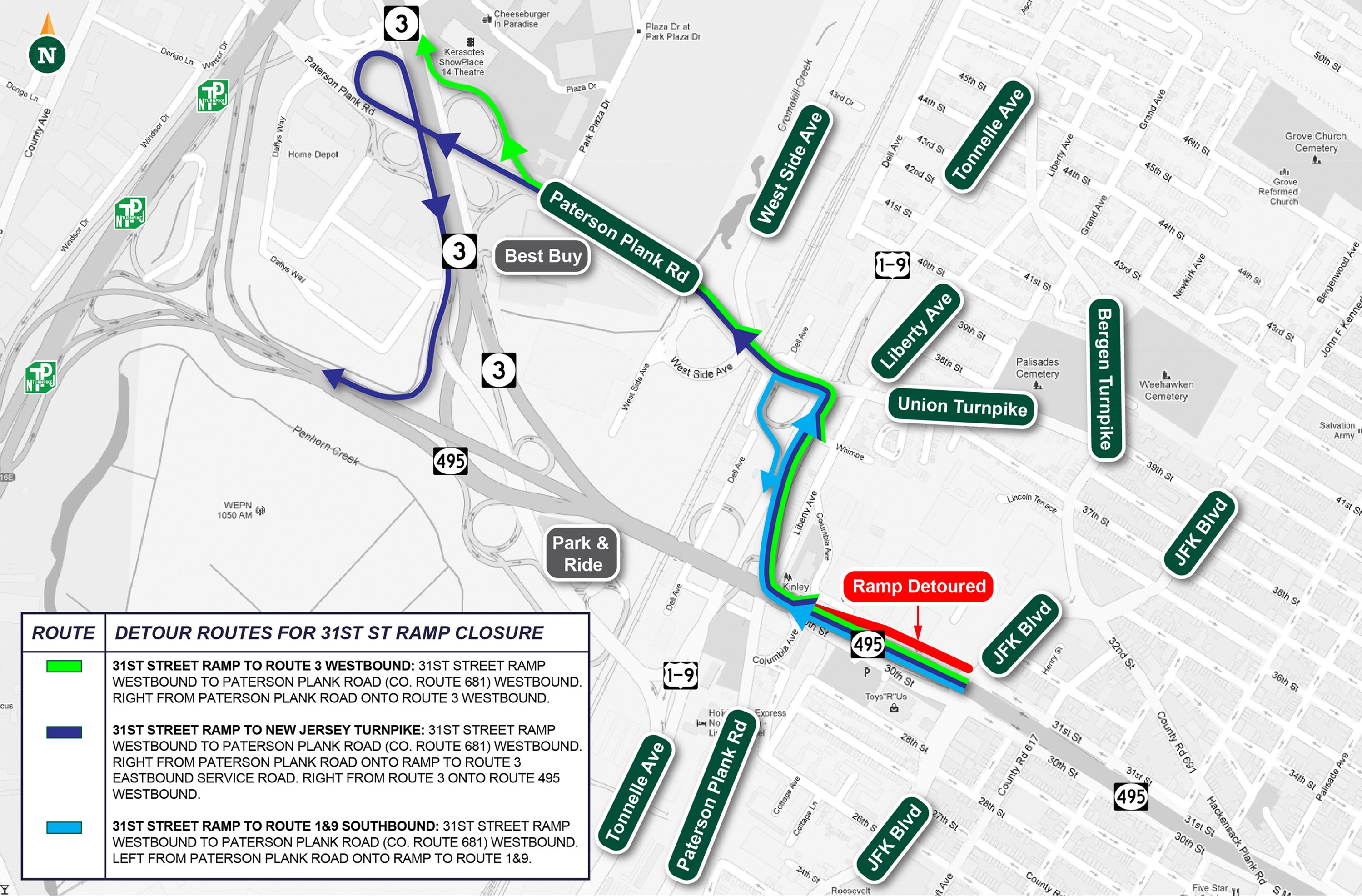 Detour and Ramp closure highlighted in the picture above.

The New Jersey Department of Transportation (NJDOT) recognizes the significance of the Route 495 corridor and has developed a plan that will allow for the much-needed work to be done while minimizing the impacts on the traveling public. A carefully planned Traffic Management Plan (TMP) will be implemented to help minimize the impact of the construction project on the traveling public.


The Department worked with County and Municipal governments, other government and non-government agencies to evaluate proposed mitigation strategies to help reduce congestion in the corridor and the surrounding road network during the project’s construction.


Local traffic with destinations to the west, such as the NJ Turnpike, Route 3 westbound, or Route 1&9 will be impacted.


An advance contract to install a series of Intelligent Traffic System (ITS) infrastructure including Full Color Matrix Dynamic Message Signs (DMS), Overhead Lane Control Signals and additional Closed-Circuit Television (CCTV) was completed during the summer 2017. This new equipment was installed prior to the start of construction to help motorists navigate the construction zone. The additional CCTV will help our Traffic Operation Team and first responders respond to incidents in a timely manner.


To improve safety for motorists and for workers in the construction zone, the 31st Street on-ramp to westbound Route 495 will be detoured to Paterson Plank Road. To accommodate the additional traffic traveling along the Paterson Plank Road corridor, temporary intersection improvements will be implemented (minor widening, restriping) and the traffic signals on this route will be adjusted to allow more time for road users to get through. Similar improvements to Union Turnpike will also be put into place for motorists traveling west from Union City and points east. Other local detours will be put into place for motorists traveling westbound along Route 495 when the ramps for Route 1&9 are closed temporarily during certain periods of construction.


For motorists traveling eastbound and destined to the Route 495 corridor, travel times will be posted using existing variable message signs or by dialing 511 or visit www.511NJ.org. Cameras will be used for traffic monitoring as well as to detect incidents and to notify emergency services as quickly as possible to help get you on your way. Tow trucks will also be on standby during construction to quickly clear the roadway when breakdowns occur.

Construction staging 3, 6 and 10 shown in picture above.

Construction staging 4 shown in picture above.

Construction staging 5 shown in picture above.

Construction staging 7 shown in picture above.

Construction staging 8 shown in picture above.

Construction staging 9 shown in picture above.